My brain works as if it’s on Hamster Wheel and there is no stopping the thought pattern. It’s been like this for as long as I can remember. There are days when I can’t let go of something from the past.

It can be something that was said or something that happened. I will go over it a thousand times. Sometimes I think of things I could’ve said or done differently. There’s so much in the past that I can’t let go of. Some of the events are small and some would be enough to break any normal person. I sometimes wonder how I’m still here. I wonder why I’m still here.

I’m a big fan of the Marvel franchise. My favorite is The Punisher and I wonder what that says about me. I do carry a lot of anger inside that I’m only now realizing.

I’ll probably have people worried after they read what I just wrote. If it was 15 years ago I would say they should be worried. But right now going up my front steps (there are 4 of them) makes my legs shake and I get dizzy. I’ve lost all of my muscle mass and can’t even lift a gallon of milk. I’m literally half the person I used to be.

My Dad has the TV on the news stations all day long. It isn’t the best thing for me but I don’t say anything because it calms him down.

All of the sexual harassment stories bother me. I have to be careful what I read on Social Media.

There’s a misconception that only attractive women or young girls are sexually harassed/assaulted. If one comes forward that doesn’t fit this criteria she isn’t believed and is crucified on Social Media. It makes me sick.

Most of my life was spent at 200 pounds or more. People always told me I had a “pretty face”, “beautiful eyes”, “beautiful skin”, “good teeth”, “great legs”, of course all of this ended with “For a fat person” or “For someone your size.”

When I went out I obsessed over what I wore, my make up, and my hair, because if I couldn’t lose the weight then I focused the attention to the positive areas. I also was a 38DD but I had a waist and carried my weight in the front and back. So I was curvy but still considered morbidly obese by Doctors.

I tell you this so you understand that sexual harassment/assault doesn’t really have to do with how a person looks. I had no self esteem, I was insecure and shy, I wanted everyone to like me. I was a prime target. It didn’t help that I was drunk all the time.

There was an incident on a tour bus where I was talking to someone for about an hour. I got up to use the bathroom and when I was coming out someone was blocking my way. He only had his bikini underwear on. I smelled booze, body odor, and something I couldn’t name. I knew who he was, I just didn’t care. I was in a cocky mood. I asked him to move nicely the first time. He pushed his hips towards me and tried to kiss me. I was disgusted because I could see crusted blood where he had been shooting up on one arm.

I pushed him as hard as I could and said “What the F*CK?!.” One of the other guys came to see what was going on. He of course called me a “Fat c*nt” and told them to get me off the bus. I was already halfway gone.

I’ve never done anything with any of the musicians I’ve met. It’s a rule I always had. It ruins how you view their music and I wasn’t a groupie. I’ve had similar encounters with other band members and men I’ve worked with. Sometimes I think they think they’re doing the “poor fat girl a favor” or something. Needless to say I did fine on my own and that’s one of the reasons I’ve been celibate for 9 years. I did too fine on my own to make up for the emptiness I felt, or the sadness, or to prove my worth.

Now that I feel better about myself I don’t leave the house. lol

I have too much going round and round my head.

I also just told the story I said I wasn’t going to tell. Oh well. He’ll get over it. 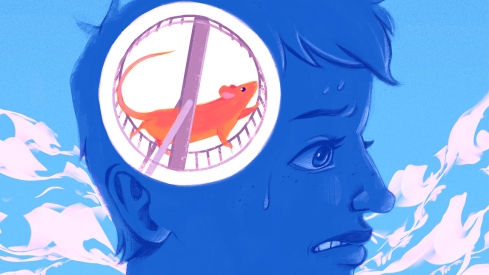 I have lived with Bipolar Disorder since my early teens. I have lived with Social Anxiety Disorder for even longer. I self-medicated with alcohol for over 20 years, that's how long it took to get a diagnosis. I'm open and honest about my mental health so hopefully one day the system will change. END_OF_DOCUMENT_TOKEN_TO_BE_REPLACED
This entry was posted on Friday, November 17th, 2017 at 6:47 PM and tagged with Harassment, Mental Health, Repetition, Symptoms and posted in Mental Health. You can follow any responses to this entry through the RSS 2.0 feed.
« You Stopped Trying Goes Both Ways
ANESTHESIA WE WILL PLEASE YA »