Tag Archives: What You Say Matters

I was scrolling through Instagram recently when a picture popped up of a musician who had done a charity event for a friend who had died in a car accident. He didn’t do much performing from what I understand he mostly talked. There were other musicians that performed but his name was more recognizable. I read the comments which I usually don’t like to do but I’m a glutton for punishment.

The musician I’m referring to had made comments about how his friend deserved a tribute unlike the “cowards who took the easy way out” these may not be his exact words because it’s been removed from Instagram in the last few hours.

He’s known for putting his large foot in his mouth and not really caring until it starts to interfere with his ticket sales or Social Media numbers. Then he back peddles.

I’ve always admired his vocal range and song writing. I read several interviews where he said he was sober. They were from reputable sources and he also said it on a TV interview. When another musician overdosed he had said that he didn’t understand because they had just had dinner together and were both sober.

This is a case of people in glass houses. Unless you’re perfect keep your comments to yourself.

I’ve met you, watched you drink from a bottle of Red under your chair, recognized the bluish-purple stain of your teeth, talked to you while you were drunk in the last 2 years. I don’t think you’ve ever truly been sober for any length of time. You belong to that secret club that believes you can drink as long as it’s “controlled”. There are other people in this club I know and it doesn’t work.

You have no right to say who deserves something and who doesn’t. You’re drinking to mask a pain you don’t want to face. These people were trying to face their pain but combined with mental illness it was maybe too much. I don’t know and you don’t know what was going on. I do know the pain, shame, and hopelessness you feel while at your lowest point. You don’t even think of reaching out. Some of us don’t have anyone to reach out to. We fear hospitalization because honestly it’s horrendous.

There’s no simple answer to this subject. It’s complex because every human is different with different brain chemistry, genetics, environment, life experience, you can’t predict or pretend to know what a person is feeling or how they will react.

I see more and more self-help propaganda that frustrates me to no end. We are talking about the brain. It’s so complex that the top scientists in the World admit they just don’t know when it comes to serious mental illness and brain disorders. THEY DON’T KNOW.

But go ahead and take advice from a person with no degree in Medicine, Psychiatry, Neurology or Neuropharmacology because they would know right? 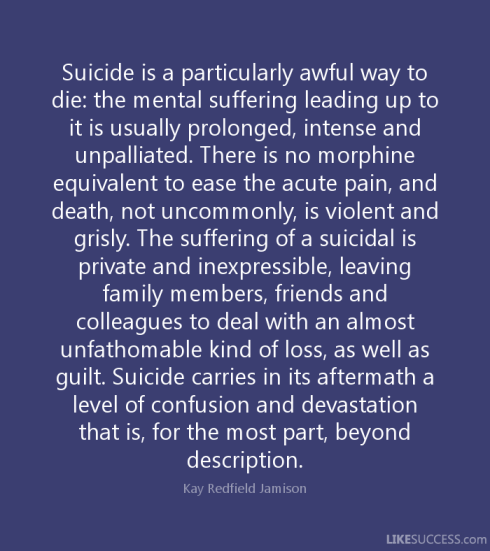 I’ll be the first to admit that I get annoyed/irritated/frustrated easily. Most of the time I keep it to myself. I also get hurt easily and keep this to myself too. It’s easier to keep feeling hurt hidden. But eventually all those feelings I keep swallowing down are going to come out somehow, someway.

When it comes to my own personal story I try to be as honest as I can. The only thing I get wrong are dates and years because I can’t remember them.

I was on Twitter recently and a person I follow replied to someone that they are bi-polar. That’s how he spelled it. I couldn’t tell if he was being serious or not. He is someone who is well known and does have a right to some privacy. I had seen it mentioned in a few different places but never directly from him. I decided to take a chance and reply to his Tweet. I replied “Were you being serious about being Bipolar? You don’t have to answer. You have a right to privacy but as someone who is diagnosed as Bipolar I wouldn’t wish it on my worse enemy.” I was hoping he would understand that if he was joking he shouldn’t be and if he wasn’t joking I understood. He rarely replies to people unless he knows them. I have no problem with that. He will block you in heartbeat if you say anything he doesn’t like or agree with. So far he hasn’t blocked me.

However, I did want to scream when I read one young woman’s reply to mine. It said “I’m curious myself. I was diagnosed as a teen but I’ve learned to control it. DISCIPLINE X 1000” Ummm…. So she can control her Bipolar Disorder with extra, extra, discipline? Well I must not be trying hard enough then. My dad and sister are right I just want to be alone and depressed all the time because if I didn’t wouldn’t I try harder to control it?

I must like to try new medications that give me vertigo, nausea, diarrhea, headaches and don’t work. I must have loved ECT and being held against my will for longer than I should have been while crying for anyone to come and get me. I even contemplated jumping through the big glass window not caring that there were bars on the other side.

This is what happens when I read shit like this. When I read how people have “recovered” from their mental illness by “discipline” or “colored candles” or “chanting in a circle to The Moon Goddess”. I get angry. It lessens my struggle that I go through to wake up every single Goddamn day and stay alive. And lately I keep asking myself “For what? FOR WHAT?!” A father who can’t hear me and doesn’t talk to me. A sister who is annoyed or ashamed by me so she doesn’t talk to me. I do get to clean up after my father because his vision is bad and he can’t see where the toilet is. That’s something, right? That makes me useful.

One trip to the grocery store and I am in pain for days. No one listens. No one cares. Men have literally watched me struggle to lift a case out of my carriage and done nothing to help. Just watched. I know I look better than I did at 250 pounds but you can’t tell me they are excited by watching me trying to lift water. Maybe they are. I’ve stopped caring. At least the young guys working there run to help me. If it wasn’t for one of them I would’ve passed out last week. This low blood pressure/low heart rate thing sucks.

I’m off topic and out of things to say. Go discipline yourselves!